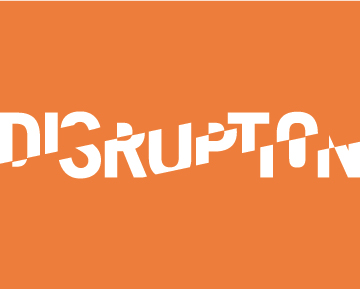 Mention the term “disruption” in a circle full of ad industry vets, and you’ll likely get a yawn, a derisive laugh, or perhaps a little teasing. Disruption has fallen out of favor as a buzzword or term invoked by the advertising illuminati, but that doesn’t mean it’s dead as a practice in branding or marketing.

If it isn’t a term you’re familiar with, fear not. You haven’t missed out on an important trend necessarily. If you already believe in creating marketing or branding that doesn’t succumb to simply parroting your closest competitors, or if you believe your ad dollars should get noticed as you spend them in an effort to engage with your targets or customers, you’re already practicing what disrupters preach.

Let’s talk about what disruption is and why you should care about it in your business’s marketing platform. As a concept, disruption is context-specific, meaning that disruption is relative to what’s considered normal in marketing, in branding, etc. Nearly everything can be disrupted. There’s marketing disruption, branding disruption, digital disruption, media disruption… you name it, it can probably be disrupted. If print or TV spots are normal or expected as a context, creating a message for your orthotic insert that utilizes a public staircase is not. Disrupters are after maximum impact. They seek to shake consumers from their sleep, aiming to take what’s expected as industry norms and, in essence, disrupt or break them.

If, for instance, you own a small business and look upstream at your larger competitors and believe, “They got big by saying this message with these supporting points, and they did it with these media vehicles, so I’ll simply follow that same formula and shave off some of their business,” you’re likely already on the wrong path. The path toward maximum impact for your marketing spending is one that is only similar enough to calm and reassure your targets that they’re getting what they seek, but pivoting hard in terms of context, message delivery, and impact to make you, well, memorable. Buying Google AdWords or lots of digital banners is formulaic; choosing to hire sidewalk artists in Asheville to cover all of them in sandy beach scenes, covered in shells or starfish, with waves gently lapping the shore, is a disruptive, high-impact way to lure travel targets to a beach destination, for instance.

Your marketing budget can feel like a bet you’re making with yourself. Do you push all your chips into the center of the table on one big, disruptive idea? No. Think of your marketing platform like an investment portfolio, instead. It’s smart to diversify. In investing, diversification helps lift your net worth or maintain it even if one of your investments dips. Stocks may be down, but your real estate balances your portfolio. Similarly, your media mix should be designed with impact in mind, and balance. Human beings tend to stop seeing what they’ve seen a million times, stop listening to messages they’ve heard over and over, etc. What is attractive and arresting is what breaks the monotony or patterns in our lives.

Disruptive marketing can create high-impact, memorable engagements, even for brand-new companies. The famous “1984” spot that launched Apple was disruptive. No conservative or safe media person would have ever advocated spending nearly an entire annual ad budget on a single TV spot that ran once. Yet by choosing to launch it in the right context (the Super Bowl), and with high impact (an amazingly provocative idea that compared other PCs to George Orwell’s nightmarish totalitarian state), it was hugely successful. Could Apple have been successful playing it safe against a much larger competitor? Doubtful. And certainly not to the extent they achieved.

You, too, can disrupt, even on a much smaller scale than Apple’s. It simply takes imagination, the assurance and guidance of industry experts, and a bit of courage. Just maybe don’t refer to it as disruption. These days, it’s simply smart strategy and marketing that refuses to be ignored.