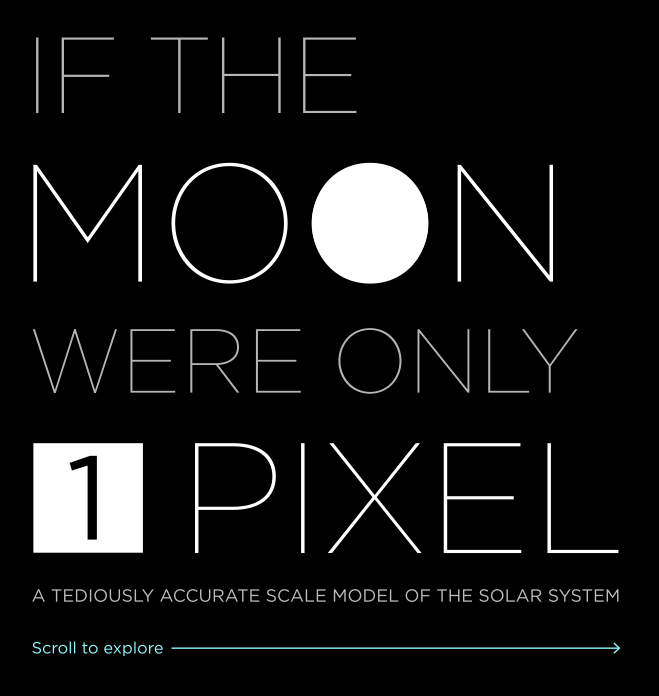 See if this sounds familiar. You’re working with an art director, designer, or illustrator on something for your business, and they start moping about the lack of “oxygen” within their design. They want less content from you so they can have more “negative space”—or big, vast areas of nothingness—within your ad/poster/etc. that for the life of you seems wasted. To you, it’s not communicating anything. To them, it seems to mean everything. It feels like real estate you’re paying good money for that’s simply not being used to communicate.

Enter Josh Worth and his “If the Moon Were Only 1 Pixel.”

It’s an interactive map of the solar system that does a great job at showing how vast our universe is. Here, there’s lots of negative space. But it all has a distinct reason for being. One everyone can agree on.

The page itself is a map that portrays the scale, in very accurate proportions, of our solar system. It operates as a side-scrolling map, which incorporates a distance ticker that ticks away as you scroll across space. I have seen many instances of side-scrolling web pages, a lot of which are photo galleries, portfolios, or interactive projects. This one, by far, is one of the best I have seen. In fact, the side-scrolling layout for this site is an integral part of the concept as a whole. The effect of scrolling past planets at high speed makes everything seem like asteroids zooming by. Along with the scrolling, the graphical treatment as a whole is great as well. The minimalistic, narrow fonts along with the clean scale and icons really stand out in a vast sea of black. In reality the site, just like space itself, is 99.9% darkness, so using this minimalistic treatment of fonts and colors really helps hammer the point home. The amount of nothing compared to the amount of information also creates an interesting curiosity as you scroll along. As you stumble upon the little remarks and planets, it’s hard not to stop and investigate.

Beyond being a clever example of how space within design can communicate the vastness of outer space, this is a really nice use of interactive media as an educational tool. Before seeing this page I knew the solar system was immense, but after seeing it put into scale with something so small really changed my view on the enormity of it. That paired with a great interface, and a really nice graphical treatment, makes it worth checking out. And perhaps thinking twice before decrying all that wasted space in your own advertising. Whether used figuratively or, as in this example, quite literally, space is your friend.